The Harvest Festivals of Akina Village: An Embodiment of Gratitude for Nature’s Gifts **

Akina has attracted a lot of folklore attention over the years because it maintains the old rice cultivation and harvest rituals that invite rice spirits to receive their thanks and are pre- liminary celebrations for a good harvest. The festivals of Shochogama and Hirasemankai, held every year in August of the lunar calendar, were designated as important intangible cultural properties in 1985.

Akina’s harvest festivals stand as an embodiment of gratitude, a ceremony, a ritual, an act of practical and creative reverence, in songs, in dances, in music, in stories of past and present shared and woven together into a continuum that gifts back to the community its ecological and cultural well-beingness.

Akina Village is located in the northern part of Amami Ōshima, the biggest of the Amami islands, with a port on the north side facing the East China Sea and a small hill surrounding paddy fields on the south side. The village is one of 18 that make up Tatsugo Town in an area that is mostly occupied by mountains with little flat land (1, 2).

Akina, in fact, consists of three communities: Sato at the mountain skirt on the west side of the village, Agare on the east side, and Kaneku on the northern sea side. The Akina and Yamada rivers flow through the village and into a sea of coral reefs. One of the best paddy fields on Amami Ōshima spreads in the downstream area of these two rivers.

The festivals are held on the day of Arasetsu, an event equivalent to the New Year according to the production calendar of the Amami Islands. Arasetsu means the first festival, which is on the first hinoe (the third sign of the Chinese calendar) of August. Six days after Arasetsu is the day of mizunoe (the ninth sign), called “Shibasashi,” and the day of kinoene after shibasashi is called Donga.  In 2020, for instance, the day of Arasetsu was on Sunday, September 20, of the new calendar while the day of Shibasashi was on Saturday, September 26, and the day of Donga was on Tuesday, November 17.  These three events are called Mihachigatsu (New August), and a seasonal event (Summer New Year) is held in each village. Summer New Year, called Natsu Shogatsu, is only celebrated in Amami Ōshima.

The New Year on the South Islands (The Ryukyu Islands and the Amami Islands) was in August of the lunar calendar. Rice was sown in October and was ripe and harvested in June of the lunar calendar (July of the new calendar). If rice cultivation on the mainland was summer, rice cultivation on the Amami Islands was win- ter, and this is deeply related to Mihachigatsu, or New August, and the three festivals of Arasetsu, Shibasashi, and Donga are held several days apart (3).

The day before Arasetsu is Sukari, which means preparation or the eve of festival. In general, on the evening of Arasetsu, the August dance begins at a house on the edge of the village as the starting point and continues in the garden of each house overnight. On the day of Arasetsu and the next day, ancestors are enshrined and given offerings at each house. In the evening, dancing is continued around the remaining houses (4).

On the day of Arasetsu, Akina Village holds Shochogama in the early morning and Hirasemankai in the evening, and then people perform the August dance, so the Arasetsu of Akina Village is different from the Arasetsu of other villages. On the day of Sukari, women give offerings at the porch of the drawing room. The offerings include steamed rice with red beans, called kasiki, and a drink called miki that is made of rice and fermented sweet potatoes (5). 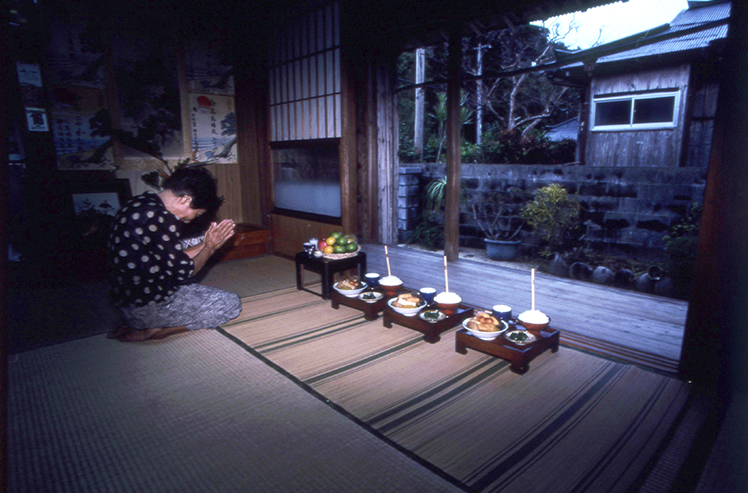 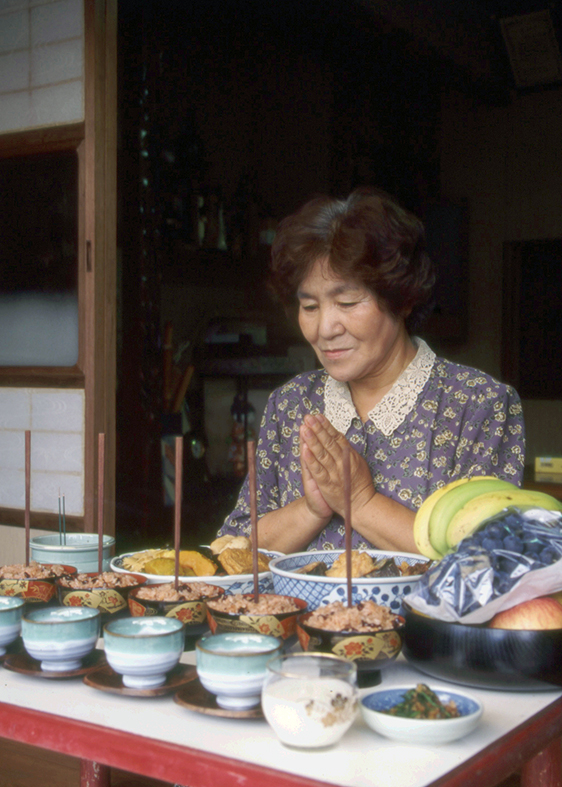 In order to live with peace of mind while being self-sufficient in the limited area of the village, people had no choice but to pray for good health and a good harvest by food offerings and praying to nature and ancestors every day. Shochogama and Hirasemankai are the biggest prayer days of the year for nature. Also, Shochogama and Hirasemankai are Shinto rituals to thank the gods for the successful harvest this year and to ask for a good harvest and no illness next year. (Hamada Futoshi)

The Arasetsu event of Akina has been handed down as a ritual for thirteen centuries. Though it was disrupted during and after World War II, it was resurrected by the Akina Arasetsu Event Preservation Society in the 1960s. In contrast to the past practice where people went around to houses and danced through the night and did Shochogama at the dawn of Arasetsu, today the event of Shochogama starts in early morning.

While in the past the festivals were held separately in each island village, Shochogama is now held only by Akina and Ikusato Villages by turns every year, and Hirasemankai is held by the Preservation Society of Hirasemankai. Shochogama and Hirasemankai were designated as a national important intangible cultural property in 1985, and their preservation has been overseen by the Preservation Society (About Akina’s Arasetsu event: https://www.town.tatsugo.lg.jp/kikakukanko/event-bunka/event/docu ments/arasetu1.pdf (3/10/2019).

People in old times always sharpened their five senses to prevent the rice from being eaten by insects or from getting a disease. I think that they couldn’t do rice farming without having the ability to read nature. Therefore, the more rice you grow, the more you come to know the fear and blessings of nature. I think this would be the reason why you have to pray, and thus, these festivals were created. (Hamada 2001, 155)

The festival for harvest thanksgiving and the good harvest prayer held in the early morning of the day of Arasetsu is mainly performed by men. Shochogama is also the name of the thatched, single-roof hut (lean-to) built on a hill facing the village. On the day of the festival, before down, village men climb the steep hillside overlooking the rice fields, where a single thatched-roof hut of six meters square is built. This is where baby boys born after the Arasetsu of the previous year are brought in the early morning to step on the roof and pray for their growth.

Following this, the guji, the chief male priest of a Shinto shrine, recites a prayer that invites the rice sprits, and then village men go up to the roof and shake the hut while singing Shochogama songs to the chijin (a traditional drum) and call rice spirits. After the singing, they shake down the roof while calling out “yora mera” and then perform the Hachigatsu Odori, the August dance, in a circle on the col- lapsed roof while giving thanks for this year’s good harvest and wishing for next year’s good harvest. The festival reaches its peak when the sun rises in the eastern mountains (5 & 6). 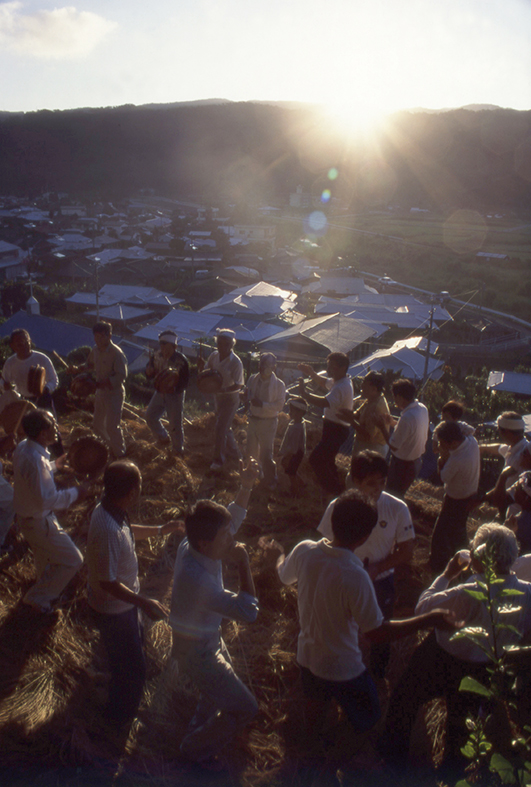 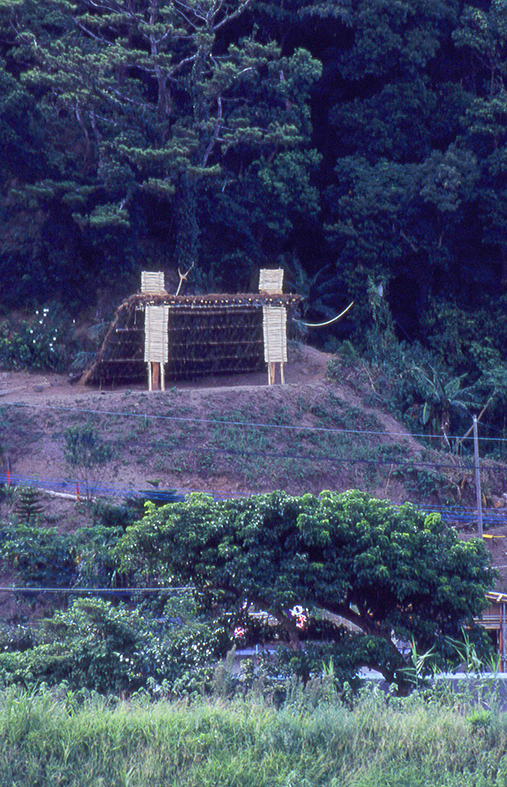 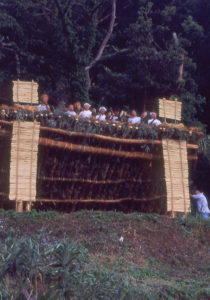 The sound of drums called Chijin echoes throughout the village, Sept. 1994. 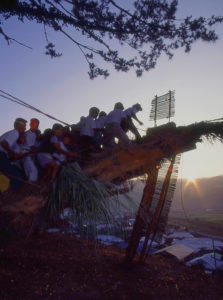 Only newborn babies, girls before menarche, and men can get on the Shochogama and shake the roof yelling “yora mera,” September 1994.

I saw the heart of making things at the festival of Shochogama. Elderly people and children are working while interacting between generations. I feel more energy in the preparation stage than on the day of the festival. At this age, I feel not only gratitude for living but also, I think, for my role in this area. (Hamada 2001, 157)

The hut has to be collapsed before sunrise by shaking on the roof while calling “yora mera,” Sept. 2000.

After collapsing the hut, the August dance starts on the roof, Sept. 1999. 57

The Hirasemankai Festival: Calling for the Gods beyond the Sea

While Shochogama is primarily performed by men at dawn up on a hill, Hirasemankai is led mainly by women on the western coast at high tide in the evening of the day of Ara- setsu. Out of the three rocks standing away from the shore, the rock farthest off the coast is called “Kami (god) Hirase,” the one in the middle is called “Merabe (female) Hirase,” and the one closest to the village is called “Inga (male) Hirase.”

Hirasemankai is held on the rocks of Kami Hirase and Merabe Hirase. The five noro  women (mediums), dressed in white, stand on the Kami Hirase rock, and the seven men and women (three guji and four shitowagi (the noros’ assistants) stand on the Merabi Hirase rock and take turns singing songs while repeating the gesture of beckoning the rice spirits that matches the rhythm of the noros’ chijin drums, inviting the gods from beyond the sea and praying for a good harvest and good catch.

The lyrics sung in the Hirasemankai celebrate the joy of harvesting by preparing lots of special treats using products harvested from their farmlands. After that, the August dance starts in a circle on the Merabi Hirase rock while the noros on the Kami Hirase rock worship with both hands towards the sea. After the prayer, they step down from the rock, dance together with the village people, and celebrate a good harvest (3 &4 ) 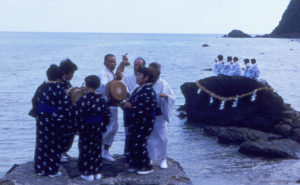 Noros (mediums) inviting the rice spirits from Neriyakanaya beyond the sea, alternating between singing and beckoning, and praying for a good harvest and safety, Sept. 1997. 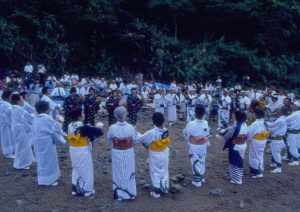 Village people dance the August dance together with the rice spirits from Neriyaka- naya beyond the sea, Sept. 1997. 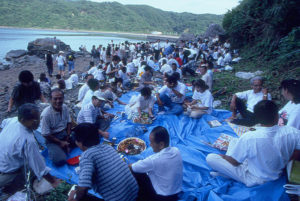 Celebrating with a potluck: after the ritual, village people bring food and drink, and the feast starts, Sept. 1996.

The village would have got the energy of creating culture from nature. One could say that Akina Village of Amami Ōshima is one of the few villages where rice farming and festivals are integrated and alive. . . . I have been watching this village for 20 years. In this village, I felt I could capture the significance of the festivals and the commitment of the villagers by taking photos of not only the festivals but also the entire rice cultivation process. (Hamada 2001, 164–165)

We wondered along with Hamada if it was the rice cultivation that ensured the continuation of the harvest festivals, or the need to keep the meaning to the festivals that have always been linked to the rice cultivation and harvesting that kept the rice cultivation going. These two interconnected village activities are undoubtedly manifestations of island ecocultural identity, for the harvest festivals are embodying the deep connection the inhabitants of the village have with their containing nature and daily interaction with it. There are several more themes one can draw on in the exploration of this symbiosis between the human and more-than-human world of Akina Village, including balancing between the female/male energies through the cycles and manifestations of nature and communication with the unseen world of the spirits, but that would require another essay to expand.

** The authors and Horizon are grateful for receiving permission to reproduce part of the original photo essay published in The Okinawan Journal of Island Studies (March 2022/2: 11-64) with the title: Akina: An Ecocultural Portrait of an Island Community through the Photographic Lens of Futoshi Hamada (http://hdl.handle.net/20.500.12000/48047)

person who wrote this 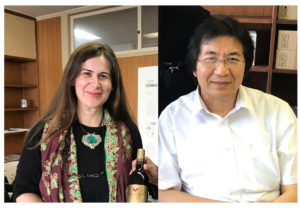 Dr Evangelia Papoutsaki is a New Zealand based researcher, the Convenor of the Small Island Cultures Research Initiative (SICRI), former International Research Fellow at Kagoshima University Research Center for the Pacific Islands, and Editor in Chief of e-Press. She has extensive research experiences in the Pacific Islands and engages in large research projects with island media and communication focus.